Visit of the Federal Ministry for Economic Cooperation and Development (BMZ) 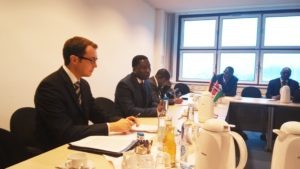 Dr Benjamin Laag presided the meeting on behalf Dr Nooke, Cabinet Secretary for Mining, Hon Dan Kazungu introduced the mining industry in Kenya, stating that the mining sector in Kenya is in an early stage of development with a contribution of mining and minerals to GDP of less than 1% to the GDP. He reported on the Kenyan government’s new strategy to increase that share to 10% by 2030. As a first step, a new Mining Act, replacing the pre-independence Mining Act of 1940 was adopted in May 2016. Its overall purpose are to give guidelines of the mining sector and facilitate for foreign investment. The Act regulates land policy, public land, land and property use, and environmental protection. It also has regulations on artisanal mining. An important element covers the shares of royalties with 70% accruing to the national government, 20% to county governments and 10% to local communities. Currently, the Mining Ministry is conducting an aerial geophysical survey project to map out the country’s mineral resources digitally. This project is monitored by a new national steering committee consisting of Kenyan cabinet secretaries, skilled geologists and technical experts.

Visit of the BDI-The Voice of German Industry 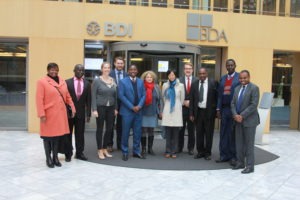 The delegation was received by Mr. Henry von Klencke and Ms. Katharina Loy, Senior Managers at the department for Security and Raw Materials of BDI. Mr. von Klencke gave a presentation about the structure and activities of BDI and its current policy issues concerning raw materials. Ms. Loy, who happened to have returned a mission to Kenya explained BDI’s strategy and activities in the Sub-Saharan Africa region. BDI is monitoring and contributing to the German Government’s Africa policy with advice and support for the purpose of the promotion of an attractive and sustainable investment climate in African countries. BDI has set up its own catalogue of activities towards strengthening German business in Africa. As a member of the Sub-Saharan Africa Initiative of German Business (SAFRI), BDI draws attention to opportunities available to German industry. Ms. Loy also mentioned the second German-African Business Summit (GABS) to be held in Nairobi from 9th to 11th February 2017. GABS will focus on Africa’s economic potential and future trends in African-German cooperation. 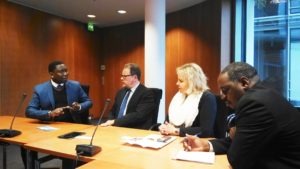 On the second day, the delegation met Dr Martin Wedig, director of the German Federation of International Mining and Mineral Resources (FAB). Dr Wedig explained that FAB is a federation of more than 70 German member companies with activities in international mining and related activities. FAB offers a platform for exchange of information on mining activities and as consultant for member companies to find partners abroad. He pointed out that Africa’s countries are rich in natural resources, in particular in critical minerals, which are important sectors of Germany’s economy. He also mentioned the challenges for investor in African countries due to intransparencies in policy and legislation and insufficient infrastructure, including energy security. Hon. Kazungu presented the new Mining Act and the new mining strategy and the status of development of infrastructure in Kenya. He promised the encouragement of his government for investments in mining.

Visit of the DAAD Office in Berlin

After welcome words by Daniel Zimmermann, head of the DAAD office in Berlin, Dr Weyler, head of Fachzentren Afrika of DAAD, gave a presentation on DAAD’s activities in Africa with focus on postgraduate and alumni programs. Prof. Boga reported on the status and current achievements of the CEMEREM project since its start in April 2016. He highlighted bilateral exchanges of staff and students, the delivery of laboratory equipment to Kenya and the review of curricula. He announced the inauguration of the CEMEREM building in April 2017 and invited DAAD representatives to the opening ceremony. Together with Charles Obiero Afullo, Senior Deputy Director of Education, Prof. Boga explained introduced higher education and research polices in Kenya. 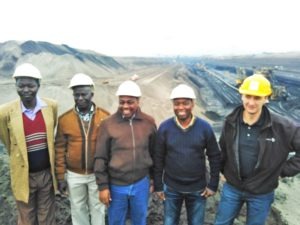 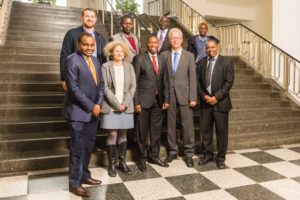 The focus of the visits to HTW Dresden and SMWK was on education and the involvement of partners from industry and consultancy in university education and research. HTWD Rector Prof. Ronald Stenzel gave an overview on practice-oriented education at HTWD and current research activities. Prof. Ulrike Feistel used the example of collaboration among three partners, Vattenfall, Ingenieurbüro Wasser und Boden Dr Uhlmann (IWB Dresden) and HTWD to illustrate benefits of such collaborative work for all three partners and, above all, for students. Another example of collaborative research funded by SMWK was presented by Dipl.-Ing. (FH) Fabian Musche. These presentations triggered an intensive discussion within the Kenyan delegation and Hon Dan Kazungu urged that universities have a prominent role to play in assisting problems in industry, specifically in the mining sector. In conclusion, Stephen Mwakesi suggested a number of follow-up actions. Prof. Boga proposed to open up dialogues on such issues with relevant stakeholders and TTU staff.

Prof. Jörg Feller, Head of the division of Inorganic Chemistry, accompanied the delegation to the SMWK. Dr Kühme, Head of Division responsible for Universities at SMWK, presented the structure and the political functions and responsibilities the Ministry and its specific role in funding universities. Dr Zimmermann, Head of Division of Research at SMWK, explained research funding in Saxony in more detail for further discussion.

Visit of the TU Bergakademie Freiberg 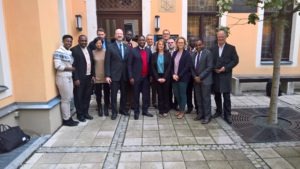 The first visit took place at Research Institute of Mineral Processing in UVR-FIA GmbH guided by Prof. J. Schoenherr and Dr Morgenroth. This is a private Institute with official affiliations to TU Berrgakademie Freiberg.

Hon Kazungu presented the mining sector in Kenya and his willingness to expand co-operation with German Universities and German companies.

All participants gave presentations of their organisations and their activities related to mining in Africa. The meeting an exchange of ideas and proposals on future co-operation opportunities.

After the meeting, the delegation visited the Institute of Underground Mining Institute and the underground mine at Reiche Zeche.

The Freiberg visit was concluded by a complimentary meeting with Prof. Broder J. Merkel, Prorektor who gave an overview of TU Bergakademie Freiberg. On behalf of the delegation, Hon. Kazungu reported on the visit in Germany, highlighting the interesting opportunities for further co-operation between Kenya and Germany.

In addition to the technical meetings and excursion the delegation had the opportunity to enjoy the beauty of Dresden where they went on an evening tour around the historic town. In Freiberg the delegation was shown around the old mining town. A visit to the exhibition Terra Mineralia crowned the day. Some time for sightseeing in Berlin had been set apart at the end of the visit.

Director Brendan Proctor Viewport More blogs from this author
Category:
CEMEREM
Visit of Members of the Tanzanian-German Centre for Eastern African Legal Studies to the South African-German Centre for Transnational Criminal Justice Musings on my visit to Flensburg University of Applied Sciences