Workshop Report: Civilizing Resource Investments and Extractive Industries: Societal Negotiations and the Role of Law – 22.-23.09.2016, at the Center for Development Research, University of Bonn 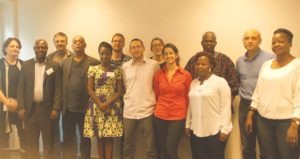 The accelerating global scramble for natural resources has continued to push the accumulation of land and other natural resources to ever new frontiers, especially the ‘global south’. Increasing investments in the global south were driven by the availability of resources and the increased profitability of investments in ‘risky’ environments during periods of raw material price hikes until the late 2000s. Furthermore, investments in the rather weak institutional and regulatory context of ‘developing’ countries seemed to be easier to implement and more profitable than under the highly regulated conditions in the ‘developed’ world.

The tendency to ignore the environmental and social externalities of large investments in resources in the ‘global south’ has long been criticized and opposed by activists. Local activism and international campaigns have raised public awareness in the global north and political advocacy as well, as consumer pressure have contributed to the generation of – albeit largely voluntary – international standards  but also national laws meant to curb the most devastating consequences of resource investments and extraction. Resource accumulation and extraction has also given rise to a vivid academic debate about the macro- and micro-environmental, socio-economic, and political impact of investments as well as effective strategies to oppose, control and steer investments in order to prevent or mitigate negative impacts.

This workshop contributed to this ongoing debate in two ways:

On the one hand, it tried to understand how investments and resource extraction are negotiated in societies in in the ‘global south’. The focus was on the rather confused and complicated linkages between global, national and local arenas. Large international investments are often promoted by international agencies as well as national governments in the home and host countries and allegedly operate within the framework of international guidelines and national legislation. Nevertheless, the way they are implemented and the way their impacts are contained is not straightforward, but depends on negotiation processes – often conflicts – in which different actors such as companies, governments, international agencies, international, national and local NGOs, CBOs, and a broad variety of local stakeholders engage with varying and changing strategies and in varying and changing networks and coalitions. Here the focus of our interest was rather on extra-legal negotiations and coalition-building strategies and their outcomes.

On the other hand, large parts of these negotiations are supposed to be framed by guidelines, laws, and regulations, to be enshrined in environmental – and social licensing processes, or are ultimately adjudicated in courts. These institutional frameworks, and the fundamental rights for citizens and the environment they instill, are the outcome of decades of opposition, awareness raising and advocacy. They carry a high symbolic value and they could provide the foundation for civilizing resource investment and extractive industries. We therefore discussed processes of legislation and regulation, but also the ways laws and rules are unmade or circumvented, and citizen and environmental rights become emptied in the legal and administrative field. The later, for instance, could be the result of transnational investment agreements, the failure to define the duties of enforcement, the weighing of competing rights, through procedural means, or because of the particular habitus of the legal social field.

The workshop brought together senior resource persons and post-graduate students to spark a discussion between senior scientists with rich theoretical background and practical experience with upcoming scholars with rich empirical material. While the former provided theoretical input and historical background to the debate, the post-graduate students presented and discussed their work in progress.

Of the 18 participants who attended the workshop, 14 presented on the topic, among them GGCDS (Ghanaian-German Centre for Development Studies) PhD-students Maliam Acio and Asaah Mohammed from Ghana as well as Grace Kamugisha and Naomi Gichuki from TGCL (Tanzanian-German Centre for Eastern Africa Legal Studies), Tanzania. Furthermore, Martina Shakya from IEE (Institute of Development Research and Development Policy Ruhr-University Bochum, partner of the South African German Centre for Development Research), Prof. Amanor (Institute of African Studies, University of Ghana) and Prof. Diaby-Pentzlin (University for Applied Sciences Wismar) contributed presentations on land issues in West Africa to the workshop. Bruno Milanez (Federal University of Juiz de Fora, Brazil) and Gustavo Gazzinelli (Councilor, State Council of Water Resources, Minas Gerais, Brazil) enriched the workshop with examples from Brazil on the topics of water and mining.

During the two days of the workshop, the participating PhD-Students and Senior Experts from eight different countries in Europe, Africa, Latin America and Asia had intensive and fruitful debates and a vivid exchange of ideas and experience. The participants’ scientific interaction will continue as the publication of an edited volume has been planned.

The workshop was made possible with the financial funding from the DAAD (through the Bonn International Graduate School – Development Research and the Ghanaian-German Centre for Development Studies). We would like to express our thanks to everyone who contributed to the success of this workshop, in particular to all participants for their valuable inputs and to the DAAD for the financial support.